Owls have fascinated man from time immemorial - to some cultures they are symbols of wisdom, while to others they are harbingers of doom and death.

Owls have large forward-facing eyes and ear-holes; a hawk-like beak; a flat face; and usually a conspicuous circle of feathers, a facial disc, around each eye. The feathers making up this disc can be adjusted in order to sharply focus sounds that come from varying distances onto the owls' asymmetrically placed ear cavities. Most birds of prey have eyes on the sides of their heads, but the stereoscopic nature of the owl's forward-facing eyes permits the greater sense of depth perception necessary for low-light hunting. 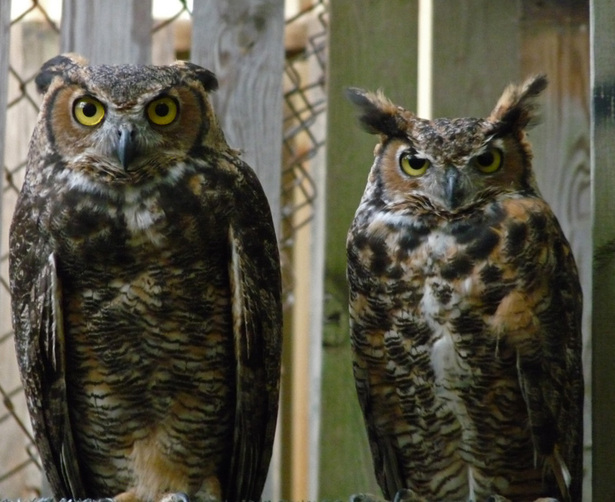 Great Horned Owls - larger female, smaller male
Although owls have binocular vision, their large eyes are fixed in their sockets—as are those of other birds—so they must turn their entire head to change views. Owls can rotate their heads and necks as much as 270 degrees, not all the way around, as many people believe. Owls have fourteen neck vertebrae as compared to 7 in humans which makes their necks more flexible. They also have adaptations to their circulatory systems, permitting rotation without cutting off blood to the brain. As owls are farsighted, they are unable to see clearly anything within a few centimeters of their eyes. Caught prey can be felt by owls with the use of filoplumes— feathers on the beak and feet that act as "feelers". Their far vision, particularly in low light, is exceptionally good. Almost all owls hunt at night, but there are some exceptions, including some owls that live in the far north, where daylight is continuous in summer, and Burrowing Owls.

Another adaption for owls' stealthy hunting is their feather design. The leading feather in each wing is modified with a serrated edge, and the rest of the flight feathers have softened edges, deadening the sound of the wingbeats. The very soft and fluffy feathers of the owl's body also help to muffle the sounds of movement.

For most owls, the indigestible parts of their prey - bones, fur, feathers - are coughed up later in the form of pellets. Naturalists can learn much about what owls are eating by collecting these pellets from underneath an owl roost and examining their contents.