Eastern Screech Owls are the smallest tufted owl in the eastern United States, but 6 other owls in the US are smaller. They have 2 color phases: red and gray. The differences are arbitrary (like our hair color) and have no relationship to age, sex, etc. EASO's can be differentiated from Western Screech Owls by the color of their beaks. The Eastern's bill is grayish green and the Western's is black. Also, the Western Screech does not show the red color phase. Their plumicorns (ear tufts)  are only feathers and have nothing to do with hearing, but are used to show expression or to make them look larger and more threatening when showing aggression.

EASO's form pair bonds that are monogamous and lifelong. In Kentucky, the breeding season is March and April. Nests are usually found in natural cavities (like Woodpecker holes) in trees, but they will also use man-made nest boxes. A clutch size is 3-5 eggs which are incubated for about 26 days, then the chicks are ready to fledge at 30-32 days.

Eastern Screech Owls are called the "feathered wildcat" because of their ferocity when defending their nests and their audacity at taking prey, even if it is larger than they are. They hunt small mammals, small birds, flying squirrels, chipmunks, reptiles and insects. Being small birds themselves,  Screech Owls are often preyed upon by larger owls, particularly the Great Horned Owl, and cats are major predators. An EASO attempting to hide from predators will perch on a branch next to a tree and pull its feathers close to its body, while erecting its ear tufts. This effectively makes it appear to be no more than another bump on the tree. 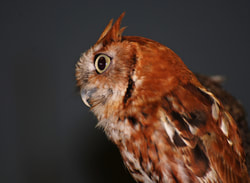