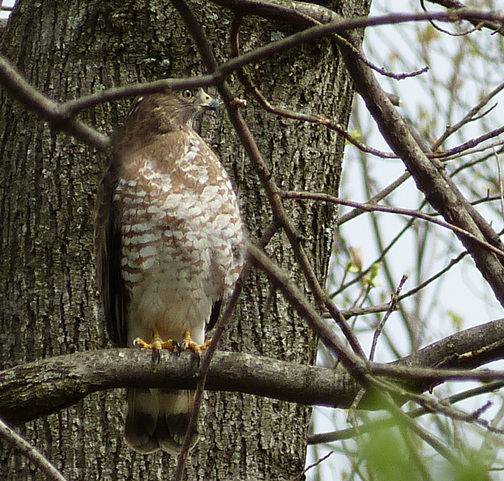 Broadwinged Hawks are the most common woodland hawk in eastern North America, but they go generally unnoticed by the public because of their preference for deep woods and their small size. While other raptors migrate south during the winter as individuals, only the Broadwing migrates in flocks, called kettles, sometimes containing thousands of individuals. Scientists think of them as southern birds that travel north to breed, based on the fact that they spend only five months of the year in the north, and seven months on migration and in the south. Juveniles generally leave earlier than the adults in the fall, giving them a safety cushion of a few weeks to find their way. Even so, a few every year seem to get "blown off course" and wander away from the inland mountain ridges that guide them. These birds end up in Florida, unwilling to make the long water crossing to rejoin the flock in Mexico.  They learn from their mistakes though, and juveniles banded in Florida one year have been recovered in South America the following year. One pathway that seems to always be used is at Veracruz State, Mexico, where an inland volcanic mountain range funnels birds using the warm thermals that carry them down the plain. 900,000 Broadwing Hawks have been counted passing over a single town on the plain in one day! 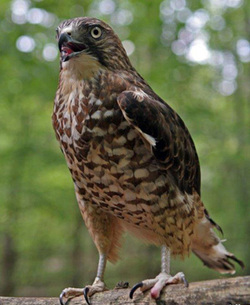 A small, stocky raptor with black-and-white bands on the tail, the Broad-winged Hawk is a bird of the forest interior and can be hard to see during the nesting season. Its call is a piercing, two-parted whistle. BWH's take 3-5 weeks to build their nests in the crotch of a tree next to the trunk and rarely re-use the previous year's nest. Sometimes they will renovate and use old raptor, crow or squirrel nests. Greenery is commonly added to the nest while it is in use, possible to act as a parasite repellent, to increase sanitation by covering food scraps or the hide/shade a nestling. 2-4 eggs are incubated or 28-30 days. The young are intensely incubated by the female until 21-24 days old, and the female continues to feed them until about 30 days. 6 weeks after hatching they become able fliers. They do not return to their natal area as yearlings.

Within the forest Broadwinged Hawks take short flights from branch to branch; they also soar in circles above the canopy during breeding season, probably in territorial defense. Courting birds perform sky-dancing displays in which they circle high in the air and then plummet toward the ground. Some breeding pairs stay together multiple years in a row, while others take new mates each year. They build nests at least half a mile from the next nearest Broad-winged Hawk pair. They defend nesting areas from other Broad-wings, Red-tailed Hawks, Red-shouldered Hawks, and Northern Harriers. Eggs and nestlings are vulnerable to predators such as raccoons, porcupines, American Crows, Great Horned Owls, and black bears. Although Broad-winged Hawks interact only with their mates in the breeding season, during fall and spring migration they form enormous flocks that often include other raptor species, sometimes totaling tens of thousands of individuals.