Barn Owls can be found on every continent of the world, except Antarctica. They are unlike most North American owls having a white face and belly, so they are sometimes known as the Monkey-faced Owl, the Flying Mousetrap, Ghost Owl or the Heart-faced Owl. They prefer to live in the countryside with an abundance of open fields and numerous old buildings or large hollow trees. They eat mice almost exclusively, but will also take other small mammals including moles, voles and shrews.

Barn Owls have phenomenal hearing. Their ears are asymmetrically placed on their head, and unequally sized. Both ears can be covered or uncovered with mobile flaps of skin. Short bristly feathers form a distinct heart-shaped facial disk that funnels sound into the ears. Through a process called triangulation, the Barn Owl can pinpoint the location of prey in total darkness using its ears. This accuracy translates into a single Barn Owl being able to catch 21 mice in half an hour, or one mouse every 1.5 minutes. A nesting pair of Barn Owls can kill more mice in a night than 10 cats. Barn Owls hunt by "coursing" over a field, swooping low over the top of fields listening for prey.

Their calls include a scream that makes your skin crawl and your ears ring. They usually hunt during the darkest part of the night, possibly to avoid their primary predator, the Great Horned Owl, who prefers to hunt at dusk and dawn. 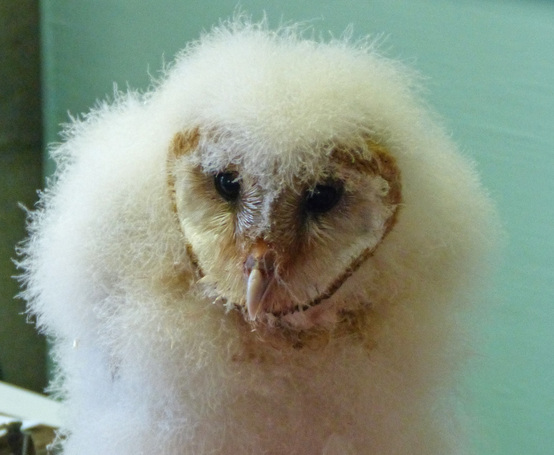 Barn Owls remain in their nesting territory year round, and they will re-use nest sites year after year. Favorite sites include old barns, hollow trees, towers, silos, roofs and chimneys, as well as nest boxes. Pair bonds are maintained year round by roosting together and mutual preening activities. If there is a good supply of food, Barn Owls have been known to raise 2 or 3 broods of chicks in the year. Clutch sizes can range from 2-11 eggs, although it is rare for more than 5 young to fledge. In Kentucky, Barn Owls are a species of special concern (one step away from being endangered) due to loss of habitat and nesting sites.

A.J. was the youngest of 5 chicks hatched by Artemis and Lucretia in our captive breeding program in the summer of 2002. Artemis had duties of caring for his mate and the chicks, as well as going to education programs. We decided to hand raise A.J. and let him take over the duties of his father as our education Barn Owl. He quickly delighted the children of Kentucky with his quizzical looks, which are all natural behavior for an owl.

Soren is our second education Barn Owl, hatched at RROKI near the end of our captive breeding program in 2005. He had a vision problem and was rejected by his mother, so he also was hand raised. He was named in a contest after the Barn Owl hero in the movie, "The Legends of the Guardians of Ga' Hoole." He is a friendly little bird, always looking for a girl friend among the volunteers. He was added to our education permit in 2010.
​