Barred Owls are found in the Eastern half of the United States, where they prefer mature oak woods, stands of mixed hardwoods and conifers and swamps with a lack of underbrush, thick dense woods. They are mostly sedentary birds, who form permanent pair bonds and have permanent territories that are defended throughout the year. During courtship the male gives a wide variety of calls while pursuing the female, and then he will perch near her, raising first one wing, then the other, then both together. 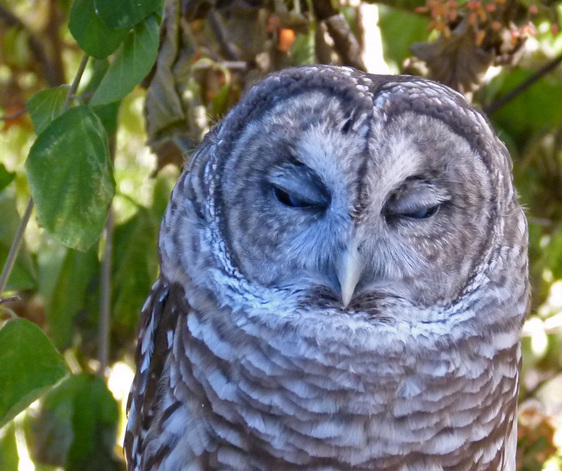 Known as the "True Hoot Owl," the Barred Owl makes more different kinds of calls than any other owl in North America. The most common call sounds like "Who cooks for you? Who cooks for you allll?" and can be used to call in the owls. Others sound like whistling, baying hounds, barking dogs, a human screaming in agony, cackling, yells and maniacal laughter. Often many owls will begin calling in a pattern that resembles humans singing in a round. Adult male Wild Turkeys will gobble in response to the hoot of a Barred owl as a warning for it not to attack its young.

Barred Owls eat a variety of small mammals, especially rodents, and a wide variety of reptiles, including frogs, lizards, snakes and salamanders. They will also take insects, birds up to the size of flickers, Screech Owls and Long-eared Owls. Sometimes they may wade knee deep in water to catch fish with their feet. At RROKI, we always give young owls a chance to practice hunting before they are released by putting live mice in a big sandbox in the flight cage. The chicks are fascinated with the mice! 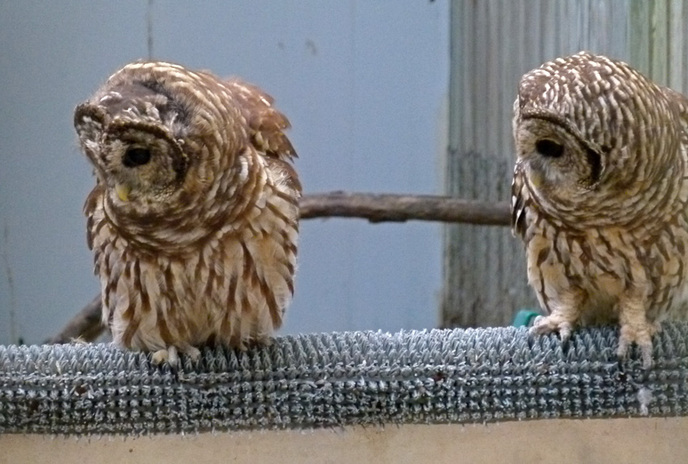 Unlike other raptors whose primary tools are their feet and talons, the Barred Owl has its power more evenly distributed between its talons and beak. Their hooked beak is incredibly strong, capable of cracking the shell on a turtle, while their feet are not quite as strong as other raptors'. Barred Owls have a very visible nictitating membrane, appearing as a blue film sliding over their brown eye from a distance. It is actually a third eyelid that moves diagonally across the eye from the upper corner, which all birds have. The membrane is a translucent, protective covering that the owls use when flying through thick woods and feeding young to prevent sticks or overly eager youngsters from scratching the eye.

Barred Owls have begun expanding into the Pacific Northwest due to their dependence on old growth forests for nest sites. The Spotted Owl is native to this area, and sometimes they interbreed, producing a "Sparred Owl." There is talk of shooting the Barred Owls to eliminate them in this territory since the Spotted Owls are declining in numbers. 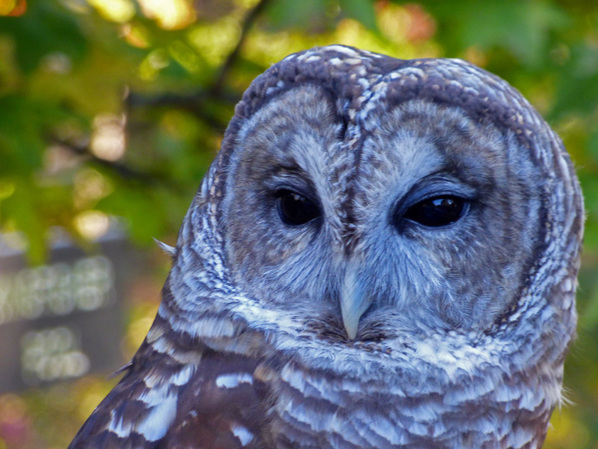 Lockett is a human imprint and can't be released. We acquired him when the owner of his previous rehab center was diagnosed with a terminal disease. He loves to serenade us every night.