The Northern Saw-Whet Owl is a very small, short-bodied owl with a relatively short tail. They breed in northern coniferous and deciduous forests, using woodpecker cavities for nest sites. They do migrate to Kentucky during the winter, however, especially the juvenile birds.

These owls hunt mainly at dusk and dawn, using the "sit and wait" tactic to drop down onto prey on the ground from low hunting perches. When prey is plentiful, a Saw-Whet Owl will kill as many as 6 mice in rapid succession, without eating any of them. The excess food is cached or stored in safe places and, in winter, is thawed out later by "brooding" the frozen carcass. When food is plentiful, they commonly eat only the head of the mouse. Adult mice are usually eaten in pieces in two different meals. One owl was found dead after trying to swallow a large mouse whole. They are called Saw-Whet because their call is said to sound like a saw filing on wood. Since few people now are familiar with that sound, we now say the monotonous "whoop" sounds more like the beeping of a garbage truck in reverse. 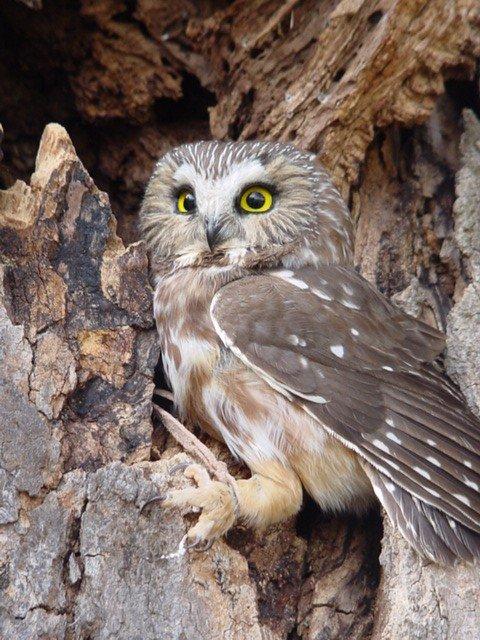 Northern Saw-Whet Owls nest in old woodpecker cavities, in relatively short trees, between March and July. The female does all the incubation, while the brings food to her and defends the nesting area. Incubation lasts for 21 - 28 days, and the young fledge in 4 to 5 weeks. The young are card for by the parents for a few weeks after they leave the nest. While she incubates, the female keeps the nest very clean. When the young are about 18 days old, she starts spending the night in another hole, and then the dirt starts to accumulate. By the time the young leave the nest, the nest cavity has a thick layer of feces, pellets, and rotting prey parts.

Zoe was hit by a car and injured in Utah. She was cared for at the Second Chance Wildlife Center. She was transferred to us to be used as an educational bird. However, her left wrist was frozen and had open wounds when she arrived. X-rays showed she had old left radius and metacarpal fractures. Despite our best efforts, she continued to self-mutilate her wounds. Our vet, Dr. Missy Jewell, amputated the left wing at the carpal joint (wrist). She has adjusted well and is quite the feisty little owl. Eileen, our late founder, always wanted an owl named Zoe. ​