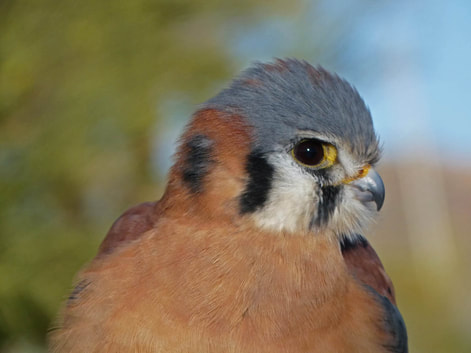 Kestrels are the smallest and most common falcon in North America and are often incorrectly called "sparrow hawks." They have the long, swept back wings that are typical of falcons, allowing them to be very maneuverable in the air. In the wild, they will eat snakes, lizards, bats, smaller birds, mice, voles, and insects such as beetles, grasshoppers, cicadas and dragonflies. They like exposed perches such as telephone poles, wires, fence posts, and dead branches on trees. They are swift, erratic fliers, and in  a flat flight they may travel at up to 39 mph, and can dive at speeds up to 60 mph. They pump their tails and bob their heads while perched. Kestrels are capable of hovering when hunting, and this behavior is frequently seen over highway medians.

Kestrels are one of the few sexually dimorphic raptors in North America, that is, the males and females have different colors. The male has a rufous belly and tail, while the female has stripes on her belly and tail. The black spots on the nape of their neck are called "false eyes" and they are thought to be protective coloration. The "eyes" deter predators by making it appear that the Kestrel is watching them at all times. If they capture extra food, they will cache it for later consumption in a few hours or days. Kestrels prefer to nest in natural cavities found in trees, cactus, or cliffs, but they will use man-made nest boxes and building cavities.  They compete intensely with Screech Owls for nest sites. Kestrels are the only North American raptors with circular nostrils. If a Kestrel could read, it could read a newspaper lying on the ground from the top of the Empire State Building. 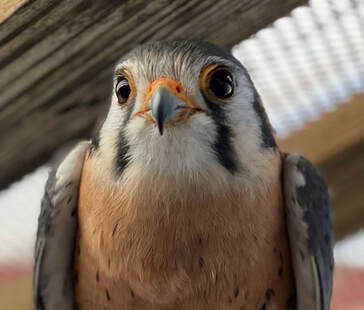 Captain Jack is our male Kestrel who came in as bird 2010-88 with two other siblings after their nest tree had been cut down. All three were kept by a mammal rehabber, who did not know the consequences of hand-raising raptors. As a result, Captain Jack and his siblings are imprinted on humans and not releasable. Captain Jack and his late sister, Pinky Lee stay at RROKI and act as educational animals and foster parents. In the spring of 2011, despite being just over a year old, Captain Jack and his sister helped raise 11 orphaned American Kestrel chicks that have been released into the wild. Their other sister, 2010-86, was sent to Schlitz Audubon Nature Center in Wisconsin where she is acting as an educational animal. Captain Jack Sparrow was named by one of our volunteers after the Pirates of the Caribbean movies. Originally named Captain Jack Sparrow Hawk, as Kestrels are sometimes mistakenly called Sparrow Hawks, it was shortened to Captain Jack for convenience. 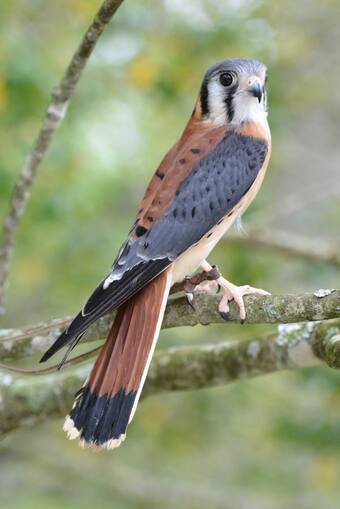 Maverick
Maverick came in to us as Bird #15-141. Likely a chick from a second clutch, a man had found him after he fell from his nest. Unfortunately, instead of turning him over to a licensed rehabilitator, he decided to try to raise him on his own. This resulted in Maverick becoming a human imprint and is therefore, unable to be released. He was named for Tom Cruise's character in the movie Top Gun.